The Prophet peace be upon him said: "There is no deed that is better in the sight of Allah or more greatly rewarded than a good deed done in the (first) ten days of Thul Hijjah”. Increase from the worship of Allah during these blessed days and nights and aim to make positive changes in your life in these days.

It was reported from Abu Qutaadah that the Messenger of Allah (peace be upon him) was asked about fasting on the Day of 'Arafah ( 9 Zil Hijjah). He said: "It atones for the sins of the previous year and of the coming year". (Hadith-Muslim)

Prophet of Allah (pbuh) was asked: "What is this sacrifice?" He said: "It is the way of your forefather Ibrahim (AS)". They asked: “What (reward) is for us therein? He replied: "There is a reward for every hair (i.e. the reward for meat and useful parts of the animal's body will be very lofty in merit, but there will also be a great reward for the parts which are useless and thrown away such as the hair)". They asked: "For the wool, Ya Rasulullah?" He replied: "There is one reward for every strand of wool." (Hadith: Ahmed, Ibn Majah)

Islamic Foundation of Ireland would like to announce the following schedule for Eid Al-Adha 1439H/2018, which this year falls on Tuesday the 21st of August 2018 (10th of Dhul Hijjah).

Parking will be available at the Stadium & Griffith College&nbsp;during the Eid day.

You have commitments towards your neighbours. A Muslim should not disturb his/her neighbour by e.g. parking vehicles in no parking zones, blocking drive ways and footpaths.

Please follow the instructions of the Gardai on duty outside the mosque.

Islamic Foundation of Ireland team would like to take this opportunity to congratulate all Muslims on the celebration of Eid Al-Adha for the year 1439H. 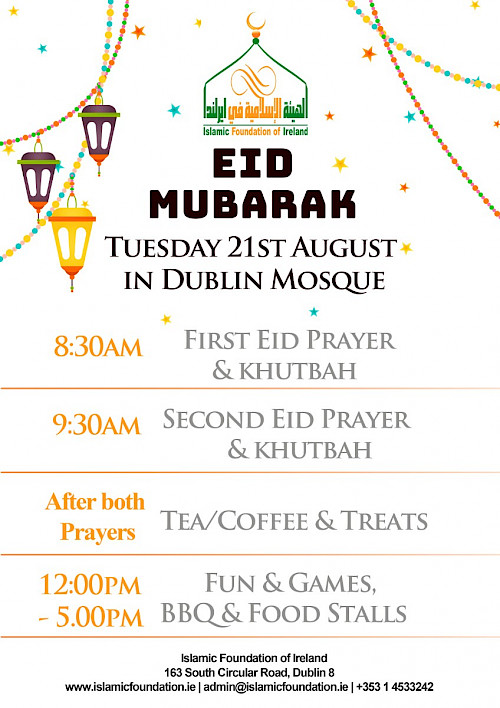